Anyone who has anything to do with golf or follows golf has heard of Jack Nicklaus. He is a player, a designer, a philanthropist and an inspiration. Many regard him as the greatest golfer of all time and he was titled “Golfer of the Century” or “Golfer of the Millennium” by most major golf publications in the world. You can say he was the "Sachin Tendulkar" of Golf. [caption id="attachment_78" align="alignnone" width="493"]

June 24, 1961: Jack Nicklaus holds his trophies after winning the NCAA Golf Championship at Purdue, West Lafayette, Ind., June 24, 1961. Nicklaus beat Ohio State teammate Mike Podolski, 5 and 3, for the collegiate crown. (AP Photo-Courtesy GolfChannel)[/caption] Nicklaus’s career as a player spans over 25 years, in which he won 18 major championships. Nicklaus started playing golf when he was 10 and scored 51 the first time he ever played at Scioto Country Club. This is where he came in contact Jack Grout, who eventually became Nicklaus’ lifelong Instructor. Jack was a prodigy and went on to win the Ohio Open at the tender age of 16. The next year at 17, he won the International Jaycee Junior Golf Tournament. He won many accolades during his career as an amateur and finally turned pro in 1961. [caption id="" align="alignnone" width="633"] 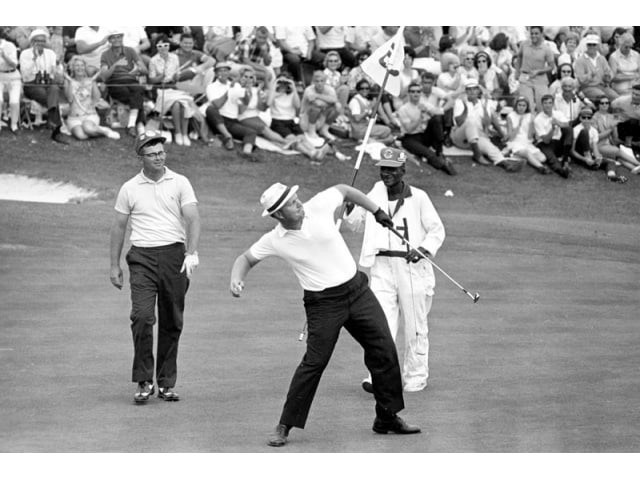 April 11, 1965: Jack Nicklaus winds up as he is about to toss his ball down the fairway after he putted out to win the Masters. He fired a record score of 271, 17 strokes under par. (AP Photo)[/caption] This was a golfer to look out for and people around him were forced to take notice. Just a year after turning pro, in 1962, Jack won his first U.S. Open title. Next year, he bagged the Masters tournament and PGA championship. By 1966, at 26, he had won all major golf tournaments. He continued to play and win till 2005 and closed with 23 PGA tour wins. [caption id="attachment_79" align="alignnone" width="640"]

April 9, 2005: Jack Nicklaus waves goodbye during his final round at the Masters. (Photo by Harry How/Getty Images)[/caption] Apart from being one of the most successful golf players of all time, Jack has also established his company, Nicklaus Design as the best in Golf course design and creation. The company has designed over 290 golf courses all across the globe. For six consecutive years from 2004 to 09, Golf Inc. magazine ranked Jack “The Most Powerful Person in Golf,” for his contribution as a golfer, designer and business person. [caption id="attachment_77" align="alignnone" width="640"]

Photo by Darren Carroll/Getty Images[/caption] Jack Nicklaus continues to be actively involved even today with golf in one way or another. He has written books about golf, promoted golf computer games, managed tournaments, and supported social causes. He is a man worth respecting and a man worth learning from. Posted on: 2016 Jun 9 Thu
Posted by: Tushar Narang